Article from The LA Times by Peter Manseau on photography.

We might look back on 2017 as the year we argued about images.

The Trump era began in earnest when the White House contested aerial photographs showing diminished inaugural crowds. The fight over football players kneeling during the national anthem has played out, in part, through Photoshopped memes of NFL stars burning American flags. After Hurricane Harvey devastated Houston, social media users passed around jpegs of sharks swimming along a freeway. Just how much distance was there between Sen. Al Franken’s fingers and Leeann Tweeden’s flak jacket? Did Sarah Huckabee Sanders really bake that Thanksgiving pie?

These debates reveal that the relationship between seeing and believing is rarely as simple as the old saying suggests. Even as we strive to maintain a tenuous grip on objective reality in this truth-challenged time, we tend to see what we want to see — and perhaps it’s best if we all acknowledged that fact.

After 180 years of living with photographs as part of human experience, we’re still not quite sure how to treat them. The estimated 1 billion photographs we collectively take every day have perhaps taught us to recognize, when we pause to think about it, that all images are framed, composed or selected. Yet we still hold them up as the ultimate documentary evidence. (“Pics or it didn’t happen,” goes the online mantra.) The emotional power of photographs to serve as, in the words of one early observer, “mirrors that remember” causes us to forget that, at best, images are never the whole truth; at worst, they can tell dangerous lies.

“Nothing can be so deceiving as a photograph,” Franz Kafka once said, and the technology of photography has been complicit in this deception from the beginning.

The earliest known photo depicting human activity was itself a work of inadvertent obfuscation. When the man usually credited with inventing photography, Louis Jacques Mandé Daguerre, pointed his camera at the Boulevard du Temple in Paris one morning in 1838, the image he developed showed two figures — a shoe-shiner and his client — standing among trees and buildings beside an otherwise empty road. It’s a striking image. The view it provides is so bereft of movement that two men present could be the lone survivors of a plague. 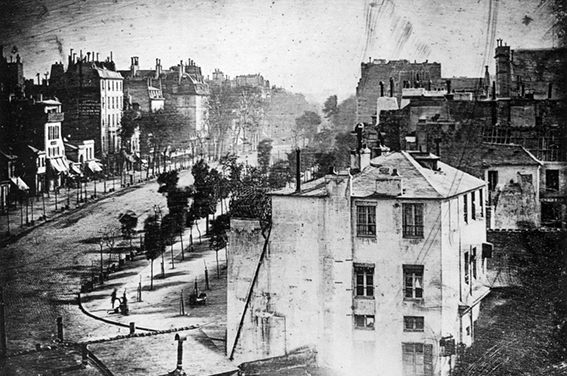 That boulevard was in fact bustling when Daugerre took his picture. In the infancy of the art, exposure times were measured in minutes rather than fractions of seconds, and so the horses, carriages and pedestrians going about their business cannot now be seen. Only those subjects that remained as still as the trees or buildings would be recorded by history. Like any photograph, the scene it shows is proof only that a picture had been made, not of what it seems to portray.

As photography became commercial, the deceptive possibilities of this theoretically objective art became a feature rather than a bug. Some enterprising 19th century portrait artists offered to make stereoscopic blended images of young lovers, supposedly providing a glimpse of the faces of their future children. Others promised to touch up their photographs with paint to remove blemishes or make appearances more appealing. When the renowned photographer Mathew Brady took Mary Todd Lincoln’s picture in 1861, he allayed her fears that she looked too matronly by making her hands more dainty and shaving a few inches off her waistline.

Not long after, Brady helped photography find its most potent realm for deception on the battlefields of the Civil War. He and other chroniclers of the conflict, including Alexander Gardner, Timothy O’Sullivan and Peter Weaver, are now known to have staged photographs of the dead at Gettysburg. The very men rightly heralded as the progenitors of photojournalism were also pioneers of fake news.

In many cases, their intentions were honorable. As the New York Times reported on Brady’s and Gardner’s work, they succeeded in bringing home “the terrible reality and earnestness of war.” Their less scrupulous contemporaries, however, preyed on the widespread belief that photographs provide true depictions of reality. They fed American hunger for a final look at lost relatives via a booming post-war market in ghost pictures, including an infamous image of the alleged spirit of Abraham Lincoln himself.

The inescapability of photographs in our media-besotted and advertising-saturated times makes it difficult to appreciate just how miraculous they must have seemed when they were novelties, and how utterly convincing they were as a result.

Yet insofar as we are now more savvy in our relationship with images, it is only relative to those who saw them with uncomplicated eyes.

Even now, photographs remain beguiling enough that we are only selectively suspicious — and thus selectively naive — inevitably interpreting images through the lens of preexisting beliefs. The possibilities for altering and sharing images far surpass our capacity for detecting deception, and we are left only with our gut feelings and biases to separate fact from fiction. We remain desperate for photographic evidence while unable to trust what we see.

Peter Manseau is the author most recently of “The Apparitionists: A Tale of Phantoms, Fraud, Photography, and the Man Who Captured Lincoln’s Ghost.” Follow him on Twitter @plmanseau.